Six graduates reflect back, look forward, and celebrate the moment!

Many of the 984 students served this year by Access Barnard — the program dedicated to supporting international, first-generation, or low-income students — traveled geographically and culturally to take their first giant steps toward their futures while at Barnard.

In the run-up to Commencement 2022, six graduating Access Barnard seniors weighed in on what that walk across the stage at Radio City Music Hall means to them.

“It was very fulfilling to dedicate my thesis to Guatemala, the native country of my parents, and write my thesis in Spanish so that my family members could understand my work. If someone told me that I would be able to center Guatemala at the pinnacle of my educational journey, I would have never believed them.

“A piece of advice I wish I would have given myself before entering Barnard: Major in whatever interests you! Your major does not define your career path or your plans post-graduation.”

“[As I prepare to graduate], I think a lot about the obstacles that my peers and I have faced throughout the last four years: the pandemic, everything in our personal lives, academic challenges, and how hard we had to work to be able to push through and get to the moment. I also think a lot about life after college.

“My favorite memory at Barnard was when on Zoom, during my abnormal psychology class with Professor [E’mett O.] McCaskill, I realized that this was the major for me. I felt at peace, like I had found my passion.

“When they call my name during Commencement, as I walk the aisle to pick up my diploma, I’ll be thinking about my mother and knowing how proud she would have been to see me pave the way for my sisters and other women in my family.”

“When they call my name during Commencement, I’ll be thinking about how proud my parents and family must be. I am the first one in my family to graduate from college, so it is a very big deal!

“My time at Barnard has shaped me to become a critical thinker and someone who cares about truth and justice. I have learned to discern what I care about most and am willing to fight [to protect it]. I am currently studying for the LSAT and thinking about entering law school in fall 2023.

“My favorite memory at Barnard was taking a class with my favorite professor, Elleni Zeleke, called Crisis and War in the Horn of Africa. She was such a fun, bubbly, and intelligent professor who made me care about an issue that is obscure to many people.”

“As Commencement approaches, I am reflecting on my growth and resilience throughout the last four years. Tapping into my power by looking at my upbringing as a source of strength, not shame, has truly empowered me. I’m amazed at how much the shy, insecure, and introverted girl from Brooklyn has blossomed into a confident, proud, and vibrant force to be reckoned with. I was surprised at how far I could push myself in terms of school and work, but also in my ability to center joy in my life, especially in the last few months.

“When they call my name during Commencement, I’ll be thinking about the past that led me to this present moment, and how this present moment is truly the start of my future. I’ll also be focusing on my balance and not falling when I pick up my diploma.” 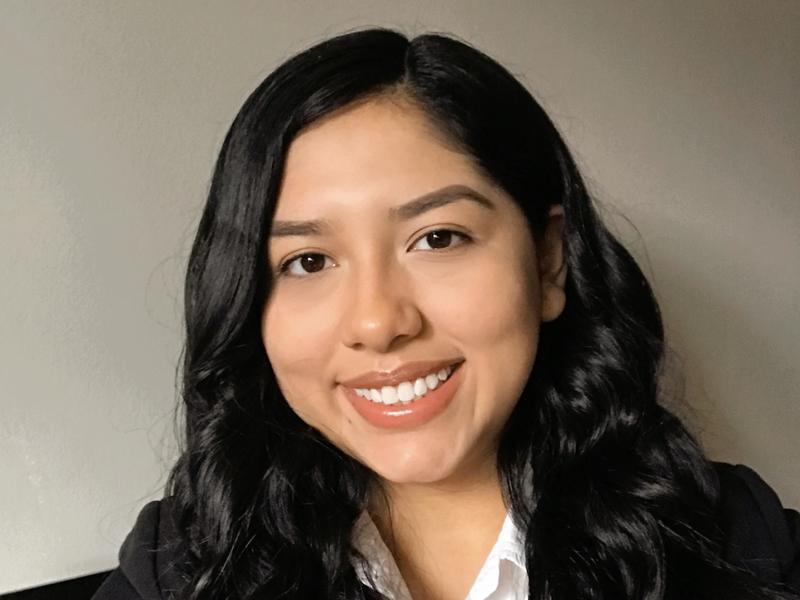 “My favorite memory at Barnard is when I served as a peer academic advisor for Access Barnard’s first post-pandemic in-person summer program. The summer staff hosted a karaoke night/talent show with all of Access Barnard’s incoming first-year students. The way the community bonded that night — it was truly something special! We sang our favorite songs together, shared our singing talents, and danced. It was a great way to begin our senior year and send off the first-year students to begin their time at Barnard.

“Barnard has transformed me into a much more confident version of myself. I cultivated relationships with professors and faculty, and I was surprised by their willingness to ensure I succeed in classes and life. I don’t know where I would be without professors Schor-Haim and Guibbory and Gianni Lopez [associate director at Access Barnard]. At times, I would feel like I didn’t belong in these spaces, experiencing imposter syndrome. But Professor Schor-Haim and Professor Guibbory always reminded me that I did belong and that I was very capable. They were much more than advisors, professors, and mentors to me — they were friends.”

“My time at Barnard will inform my next steps as I prepare for my job as a healthcare consultant. My studies — in my major of medical anthropology, the general education requirements, and my pre-med experiences — have made me more of a holistic critical thinker in the world of healthcare.
“As I celebrate Commencement, I’m honestly really nervous about no longer being a student. It has been one of the few things that has been constant in my life, and now that chapter is ending — or pausing, because grad school is not out of the picture yet — and it’s a little daunting. So, I’m thinking a lot about how to better adjust to life outside of school and academia, and also about my future. At the same time, I should live in the moment and be proud of all that I’ve been able to accomplish in my four years at Barnard. When I walk down the aisle to pick up my diploma [at Radio City], I’ll be thinking about everyone who’s helped me reach the stage by being my biggest supporters. Also, relief that I made it.”